It was good to get to operate Field Day again. The station consisted simply enough of an Icom 703 Plus set for five watts and a G5RV up about thirty feet. The power source was a small seven amp hour battery charged by a solar panel. For the site we selected a small private campground just east of St Cloud, Minnesota. They have a few primitive campsites toward the back of the property. Campsite rules required one site per tent, not counting screened in tents, and so we rented two sites for two tents on what must have been about a half acre. That gave us plenty of room for antennas and I did not have to worry about waking people while operating. 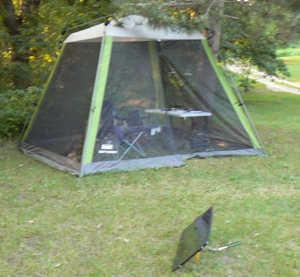 A few months ago I went to Batteries Plus and purchased two seven amp hour batteries. I thought it might be good to have a spare or even have a second station. Hopefully one of the children will someday upgrade or get licensed. I never did get around to charging them before FD. I am very glad that I put together a G5RV a couple of weeks ago as the fifteen meter folded dipole had a fight with the trees at the back of the campsite and the twenty meter folded dipole was broken and I forgot to repair it. There was no point in putting up a forty meter dipole since the G5RV was ready to go and time was short until it was time to begin to operate. Before that though we went to watch a parade at St. Cloud. 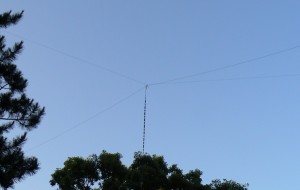 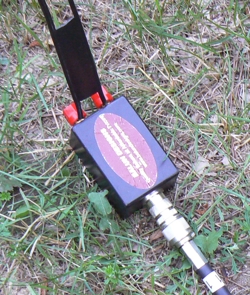 Instead of sitting with sweat dropping while I tried to write down contacts and keep cool hoping for a breeze I wore a jacket for a good part of the time I operated. I prefer the need for the jacket! It has been a bit cooler this Spring than is normal. The only problem with the weather was the lack of sunlight to power the solar panel. It still charged the battery, but I never saw the battery voltage increase except after taking a break to eat or sleep.  Toward Saturday evening we did have some sun and I moved the panel every little bit chasing what sunshine was available. As in the last few years I did not operate all night. I called it a night around ten. I had worked the night before, Thursday night/Friday morning, and was only able to get about three hours sleep. Friday night was on the cool side and we woke up a good bit. The lights hanging above the table are from K-Mart in the camping section. Walmart has some as well, but they are not as well made. One hanging from the center of the tent plus these made the tent very well lit. 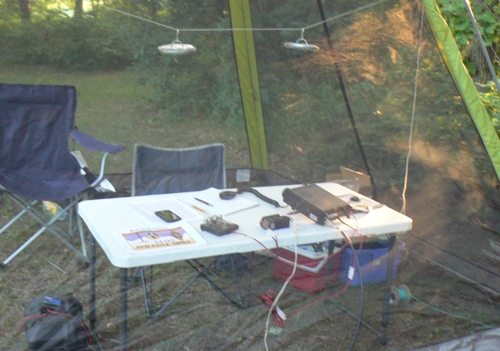 So with only one duplicate contact the total came to eighty contacts all voice mode. The majority of contacts were on fifteen meters followed by ten, twenty, six and forty meters. The solar flux was thirty points higher than my last FD in 2009 so the bands were in much better shape. There was no problem with static or noise. All bands but forty were noiseless. Propagation on the bands did change a good bit and signals faded rapidly. 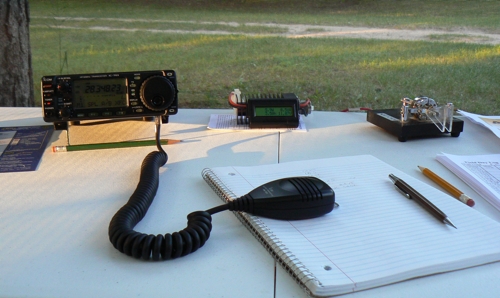 Next year I must have better antennas. As good as a G5RV is, it is a compromise antenna. I did not hear much from either coast. I did hear a weak Alaskan station calling a station I was also trying to work and a station in Barbados handing out contacts on the top end of fifteen meters. Other than a few exceptions most of the stations I worked were between five hundred and fifteen hundred miles. 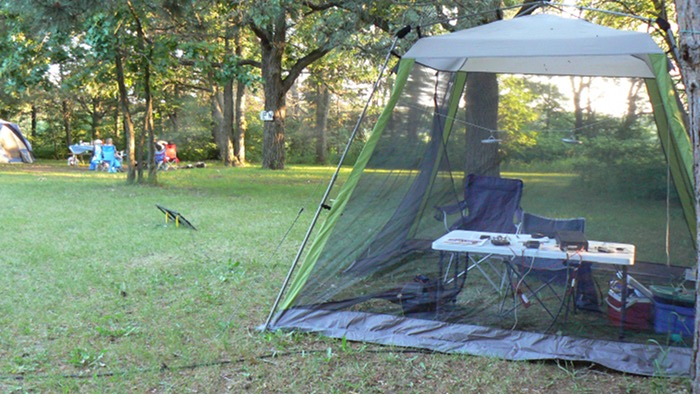 It was nice having some of the family along camping this year. The family is very supportive of the hobby and that really helps to make it a good experience. This was our first time out camping in several years so it was a good test for us and convenient since we were only five miles from home.

By the way, I just repaired the twenty meter folded dipole and put a new center support on it. Maybe I’ll find myself in a city park this weekend trying it out.