Today was the Saint Cloud Amateur Radio Club annual picnic. It was a small gathering at the club house, donated by the Burlington Northern-Santa Fe railroad. Saint Cloud has the best hamfest in the state of all that I have attended. If you were to attend only one hamfest in Minnesota the St Cloud winter time hamfest is the one to plan.

I had thought to set up my portable station in a city park for practice this morning, but decided to combine the picnic with the setup. This time I tried using the twenty meter folded dipole with the 30 foot mast. The far end is hooked to the crank up tower as seen in the picture below. 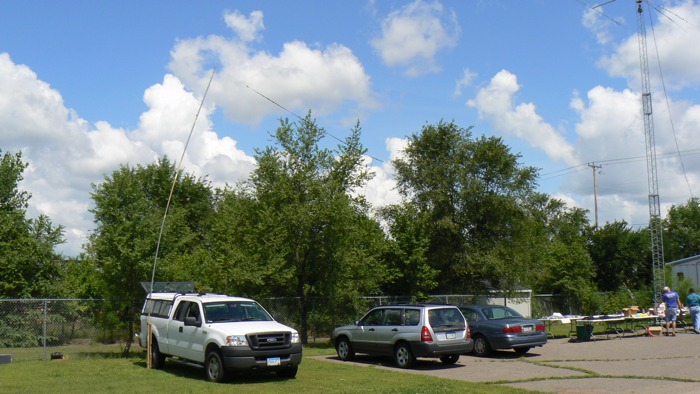 Notice how the pole bends and leans over the truck. Three ten foot masts that would probably not be such a problem, but then they would have to be carried on top of the truck. The bending pole is another reason I do like the idea of rotatable dipoles. The six meter rotatable dipole from Alpha 2 Zulu works very well. I have ordered two forty meter Hamsticks to give that a try. Although full size dipoles are preferred even the fifteen meter size would probably be difficult to push up. The mast is mounted on a door hinge that is mounted to a piece of two-by-six board under the rear tire. A board leaning against the truck protects it from the pole. Here is a picture of a previous build for work in Tennessee. A larger hinge has been used on the new pole. 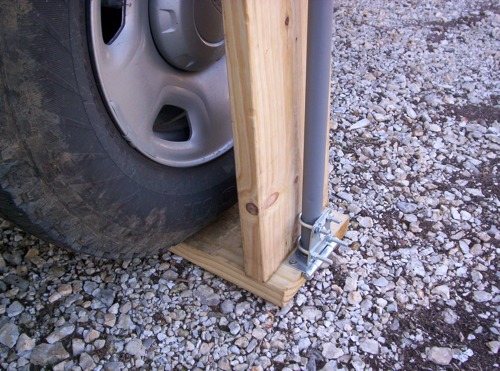 I did set up a variation of this Friday and heard Croatia and Sweden on twenty meters. This is the twenty meter folded dipole that is still resonant just below fourteen mHz and even after resoldering connections has a 1.7:1 vswr. I have tried trimming the three hundred ohm ladder line as well. It doesn’t have to measure correctly until next Field Day so there is time to work on it. Even still I have chatted with a station in Texas and did just fine with ten watts.

[Monday update] I replaced the three hundred ohm ladder line with RG-6, but did not trim the antenna yet. It is good to make only one change at a time. The vswr is now 1.3:1 at 50 ohms with the RG-6 so that is an improvement. 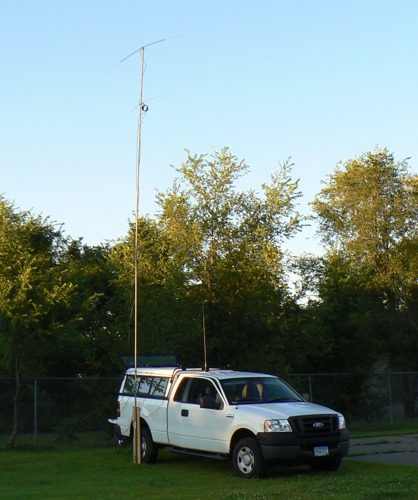 [Wednesday update] The twenty meter folded dipole is back to three hundred ohm ladder feed line and is now resonant at 14.13 mHz. I had a nice chat with someone near Milwaukee with the forty meter hamstick dipole.