I have been practicing Morse code on and off for the last several years. Most of the time has been driving in the truck listening to some very old cassette tapes that were given to me back in the 80’s. I converted them to MP3 files years ago and have kept them on my audio player. Also I have left the HF rig or one of the online WebSDR sites play on some CW contacts. W4AX is my favorite.

When I was first licensed fifteen meters was loaded with CW contacts every afternoon. Although I never made a lot of contacts, I did have a good bit of fun with my Argonaut 509. So some of my motivation comes from that fun. Also if one wants to make a lot of points in many of the contests CW proficiency is necessary.

My last real CW contacts, two, were back in Tennessee about five years ago. I did make one contact for the 2012 CW November Sweepstakes. I listened to one slower station for a while getting his information. Then I called him and gave him my information. Fortunately I was able to copy him asking for a repeat. I was running five watts from the truck with a Hamstick. I did try doing this again yesterday for the ARRL CW DX contest, but could not find anyone slow enough to copy from the truck.

Last week I connected a straight key and put it on the seat of the truck. On the way home I started calling CQ on fifteen meters running ten watts. After about five calls a station near Houston, Texas responded. Thankfully he was sending as slowly as I was sending, about five words per minute. I have had several contacts in years past where I started the contact around ten words per minute and as the conversation continued the other station sped up and I missed most of the end of the conversation. I figured I could always pull over to the side of the road, but since I was driving I did not want to push the speed.

Amazingly I only missed the last comment perhaps due to traffic. I was just entering St Cloud as we ended the conversation. I was pretty happy during and after the contact. It reminded me of my first CW contact. It was a lot of fun. Unfortunately I can not use CW from home with the set up over the internet so for now I must continue to operate mobile or portable. I am looking forward to many more contacts and improving my code speed. 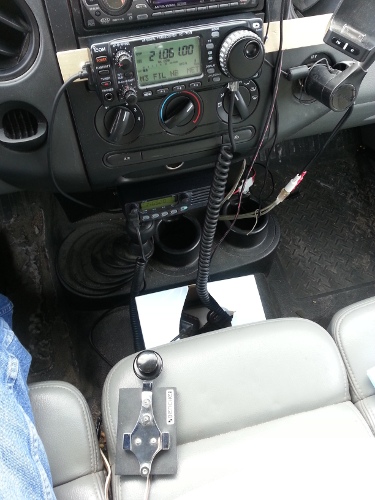