CW Demonstration at a Hamfest

The last couple years I missed the Brainerd, Minnesota hamfest. They changed the date a few years ago so I finally caught up. At a previous hamfest I met a couple hams promoting the Brainerd hamfest and asked them if they would provide a table for a CW demonstration. So with their encouragement I went and set up a demonstration of several straight keys. I took two code oscillators along with a way to plug in several keys at the same time. 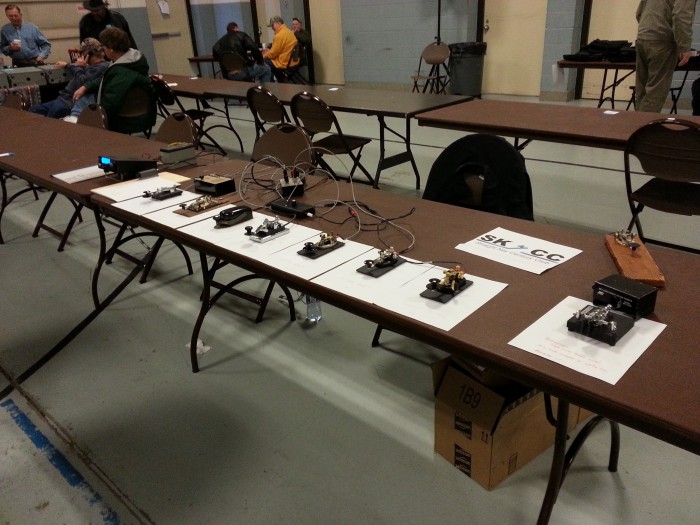 The straight keys included: Bencher RJ-1, JJ-38, Czech key, Chinese Military key, and three variations of the Nye Viking Speed-X key. On the far right was a Bencher ST-1 single lever key wired as a sideswipper or cootie key. The sideswipper had it’s own oscillator. The JJ-38 is a Japanese version of the J-38 key. The Ameco K-4 key is also a type of J-38 that was sold at Radio Shack for many years, but is not currently available and it is unknown if it will be made in the future. At this time there is only one Speed-X key available.

On the far end was a Ten-Tec Argonaut VI with Palm paddles. The Argonaut served as the oscillator for the paddles, but was mainly there for show and tell. The Argonaut happily replaces an Icom IC-703+ that I recently sold. On the way to Brainerd I chatted with another ham on 146.52 MHz. During the hamfest he brought and showed me his KX3. It’s a very nice radio and if there had not been some unfavorable comments about it’s QSK I might have been tempted to buy it instead of the Argonaut.

To make this happen I bought and built a T-Tone pure sine wave code oscillator. (link) That is the small black box in the middle. There is also an Ameco code oscillator. (link and link) I rewired the Ameco oscillator with a power switch to keep the oscillator running and reduce the chirp. Keying is now accomplished in the speaker circuit. Connected to the Ameco oscillator is a box with six 1/4 inch jacks to plug in keys. I had those in my junk box, but had to go to the plumbing area of a hardware store to get nuts. I used a splitter to get two keys plugged into the T-Tone kit oscillator. The T-Tone has a bit more volume and does not use a 555 timer chip so the waveform is not a square wave. Since some radios use 1/4 inch jacks and others use 1/8 inch jacks for key or keyer input. I typically just wire all keys with a 1/8 inch plug and add an adapter. I set both oscillators for about 700 Hertz, but let them both be a tad different so you could tell which was which. 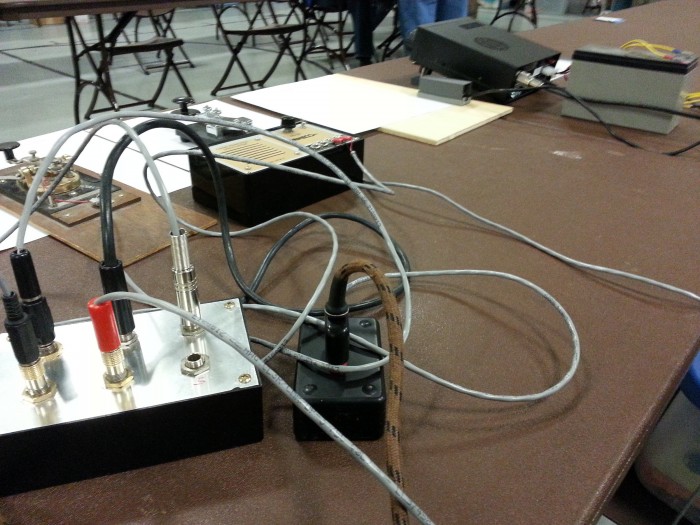 So several people came by and tried out the keys and talked about CW, straight keys and the sideswipper. One guy actually knew how to use the sideswipper. It’s going to take a while for me to get it. Several taught me something that I didn’t know about some of the keys. It was a good opportunity to promote some of the CW organizations. I had an SKCC sign, but mentioned FISTS a few times. It will be a long time before I could become a member of the CW operators club, if ever. A few people checked out the Argonaut. Everyone who came by seemed to appreciate the display and the opportunity to get to try out the keys. I’ll be doing this again.