One of the email lists that I recently joined is all about QRP portable operating. MQFD is a group that has a monthly field day operation, all QRP of course. I did a fair amount of portable operating in years past. 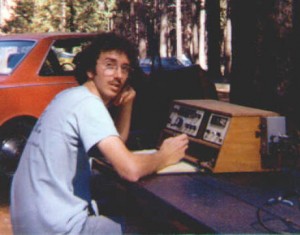 This is a picture of me operating with my Argonaut 509 back in 1977. I spent a whole week at Yosemite National Park just enjoying the calm of nature and some CW. I don’t think I made but one or two contacts. The park is surrounded by rock and cliffs. San Fransisco was about the only place my signal was able to go.

One night a man from a neighboring campsite came over and was quite relieved to see that I was listening to CW. He had been in Vietnam and had thought he was having a flashback hearing code. I was keeping it quiet, but you know how a tone can penetrate and be heard a good ways away.

My antenna was a simple 40 meter inverted V. I may have also had a 15 meter element as well. I was using a battery and straight key. The 50 watt amp was just in case. 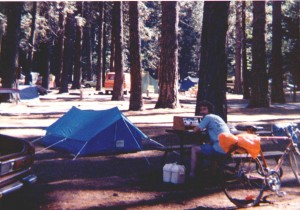