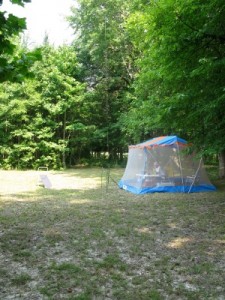 I was so happy to see fifteen meters open this year. The solar flux had been at a disappointing sixty-seven all week so the expectation of any activity above twenty meters was not high. After the first few minutes of sitting in front of the radio and listening to twenty meters I decided to see if anyone was on fifteen. It took forty-one contacts over an hour and a half before the band weakened and it was time to try elsewhere. Even then I only worked one twenty meter contact before moving down to forty for most of the rest of the evening. There were a few contacts made on fifteen, twenty and eighty meters before I called it a night. Sunday morning I worked most of a page of twenty meter stations and then finished with twenty-nine contacts on fifteen. All one-hundred-and-twenty-one contacts, in 47 sections, were SSB with five watts, QRP. My attempt at CW was limited to the last hour of my contesting with no results. 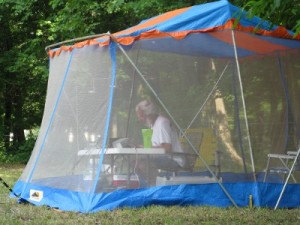 After the contest I wanted to compare last year’s results. I was amazed at how few contacts were made last year. I thought, “What was I doing all that time?” What was different? Last year after five CW contacts I made 46 contacts, thirty-six sections total, mostly on twenty meters. Maybe it was just me getting back into the swing of things after a ten year break? Perhaps it was the two additional antennas that helped? 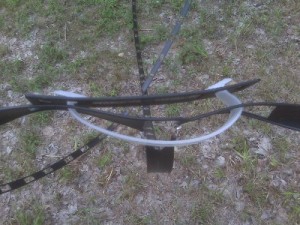 After putting up the tent I aimed my slingshot at the two trees used last year for the same G5RV from last year. The ends were a bit higher but the feed point was still at forty feet. I wanted to add a fifteen meter antenna just in case the band opened up so I put together a fifteen meter folded dipole. The antenna and feed line being both made with ladder line used a plastic handle from an old printer box to hold the center firmly together. It worked very well, but I should have bought some of the nice centers that Ten-Tec has when I was over there last year. I wanted this antenna as high as possible so I aimed at the single tallest tree in the center back of the yard. After three tries my last shot did not hit the tree and went through at about sixty-five feet making the center of the fifteen meter antenna at almost sixty feet. I also had an eighty meter dipole fed by ladder line. I sacrificed it’s height by stringing it at the end of the fifteen meter antenna and letting it slope down to a tree a hundred feet away. The center of the eighty meter dipole was about 25 feet up. If there had been time and more string the far end would have been up in a tree. Due to the addition of the fifteen meter antenna the feed line came out short for the eighty and I had to feed it with what I could find at the time. I used RG-6 out to a four-to-one current balun. I had some really nice RG-8 available, but it had N-connectors and I had no adapters and no time to do anything about it. 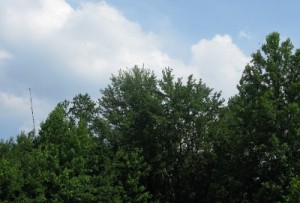 You can see that most of this was all put together last minute Saturday morning, but that does go along with the spirit of the event. I got on the air at two-thirty local time. Also in the spirit of a true emergency I had purchased a solar panel earlier this year. I pulled out the deep-cycle battery I used last year and started it on the solar panel Friday afternoon. The battery is retired from UPS use and is probably six years old now. It will be replaced before next year’s FD, but it did fairly well helped by the low power drain of the Argonaut 515. I ran without the dial light except for picture taking and never saw higher than 0.18 amps on receive. 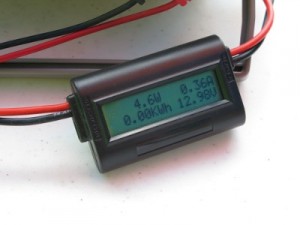 -with dial light on-

I used a charge controller and watched the current and voltage with one of the great little in-line monitors from Powerwerx. I had seen one on a You Tube video and then finally spotted it in an ad in QST. It was pretty cool to be working contacts and watch the voltage on the battery rise when there was good sunshine on the panel. I will also get an extension cable for the solar panel for next year. It would have been in the direct sun light quite a bit more if I had ten feet more line. The lowest voltage I saw Saturday night was 12.7 volts. The next morning when I started the voltage was back over 13 volts, cool! That should be the fifteen meter antenna in the reflection of the solar panel in the picture below. 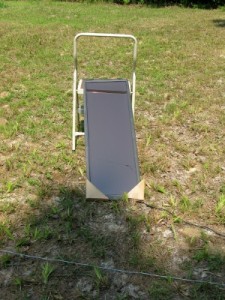 It was ninety-six degrees Saturday and if there had not been shade on the tent I would have been a 1E station instead of 1B. Thanks to the trees and our location, not too far from the edge of the hills as they head down into Nashville, there would have been no breeze either. You don’t have to go to far north to lose that nice breeze. 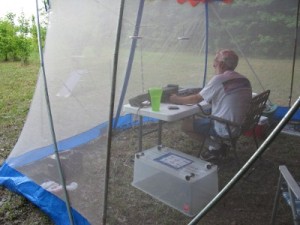 Over all it was a great Field Day. I found that my five watts could pretty much work anyone I could hear. I only really had problems sometimes when the station I was trying to work had a huge pile-up of people waiting to make a contact. I did leave the fifteen meter antenna up just in case I want to see how it works this weekend. I am looking forward to next year. 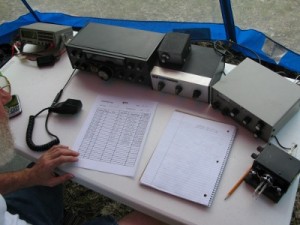