QRP portable zero Field Day plans were washed away by some very large, but ultimately imaginary storms and some not so imaginary hungry mosquitos. So for the first time since our first year in Alaska, Field Day 1990, I ran one hundred watts with the home radio and a G5RV antenna. It was probably a good idea considering the band conditions. The solar flux had been around one hundred forty, but just a few days ago took a dive to to the nineties and then eighty eight. Part way through the event the solar flux dropped to eighty four. These Field Day numbers are not that far from what we saw during the last solar minimum. A reminder is that in 1976 when I was first licensed fifteen meters was packed every afternoon.

The results are on the map below with the white areas those not worked. Not on the map, but also not worked were Hawaii and the Virgin Islands. Sections heard, but not worked were Delaware, San Fransico, Northern New York, Alberta and Quebec. I did talk to Maritime, but it is not permitted to count contacts between home stations on commercial power. I did pass up easy contacts in search for new sections. My total was one hundred two contacts in sixty sections. Bands used were 20, 40, 80 and 15 meters.

The G5RV is situated to favor stations to the east and west although since the ends slope down the pattern is a bit more omnidirectional. The ladder feed line is hanging on the east side of the tower. So the interesting thing was how many Mississippi and Louisiana stations I heard. Considering past years I don’t think I have ever heard so many stations from Mississippi. Perhaps W5JDX has had an effect in his home state? Another section that I found interesting was the number of San Diego stations. They were all over fifteen and twenty meters. There is always a desire to hear and work Santa Barbara county since I lived in Santa Maria when I was first licensed as WA6PPU. This year I was able to make contact with the Santa Barbara club. Thanks to the San Joaquin Valley station who kindly let me do so as he was also calling on the same frequency.

Because of the setback of not being able to operate portable QRP I was a bit disappointed when the contest began. Thanks to a friend who encouraged me by getting on and making more contacts than I had before he had to go to work.

Even with the band conditions the contest was a lot of fun.  I am hoping that by next year I can make arrangements for a location that is great for antennas and camping with few mosquitos.

Here is the map. 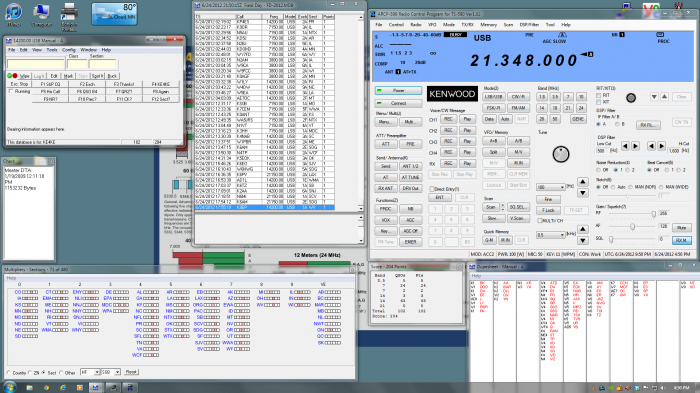